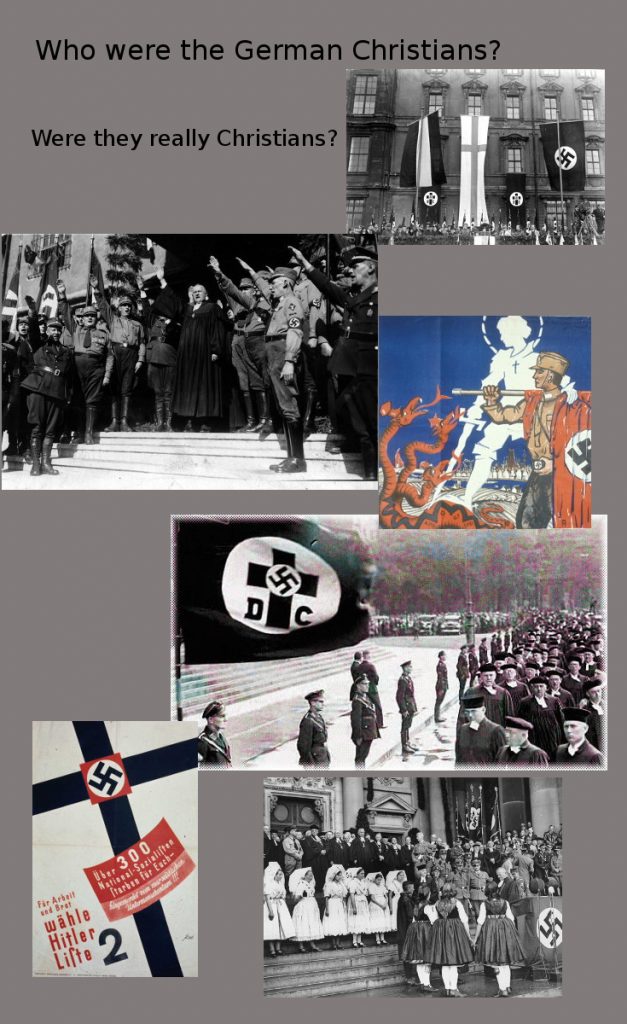 The two religious cults had a few beliefs in common – members were pro-Nazi, very anti-Semitic, and both groups rejected the authority of the Old Testament. Those commonalities allowed the short lived union of the two cults to serve Hitler and the Nazi movement. Soon after Hitler’s installation in power, he ordered the unification of all Protestant churches in Germany. Church wide elections were to establish leadership of the new German Protestant ‘Reich’ Church (‘Government’, or ‘National’ Church).

By using both Hitler’s popularity and coercion by the Brown Shirts, the German Christians won almost all leadership positions and began to force the churches away from traditional Christian doctrines igniting the German Church War. The most courageous orthodox Christian believers broke from the new Reich Church and founded the Confessing Church. Eventually, most of the Confessing Churches’ activities were  forced underground.

As German Christians figure prominently in the early days of the Nazi era, they are covered extensively in War Comes To God’s House. Chapter 14 details the creation by Hitler of The Faith Movement of German Christians from the two religious cults. Chapter 15 covers their activity in the early part of the German Church War. And Chapter 16 explores the theology of each group and how their incompatibility with each other, and with orthodox Christianity, led to the downfall of The Faith Movement of German Christians – after it had served Hitler’s purpose in debilitating the German Protestant Church.

WERE THE GERMAN CHRISTIANS REALLY CHRISTIAN?

That is a question I will leave for you to answer for yourself. In fact, providing people with information to help them make such decisions is the main purpose of War Comes To God’s House.