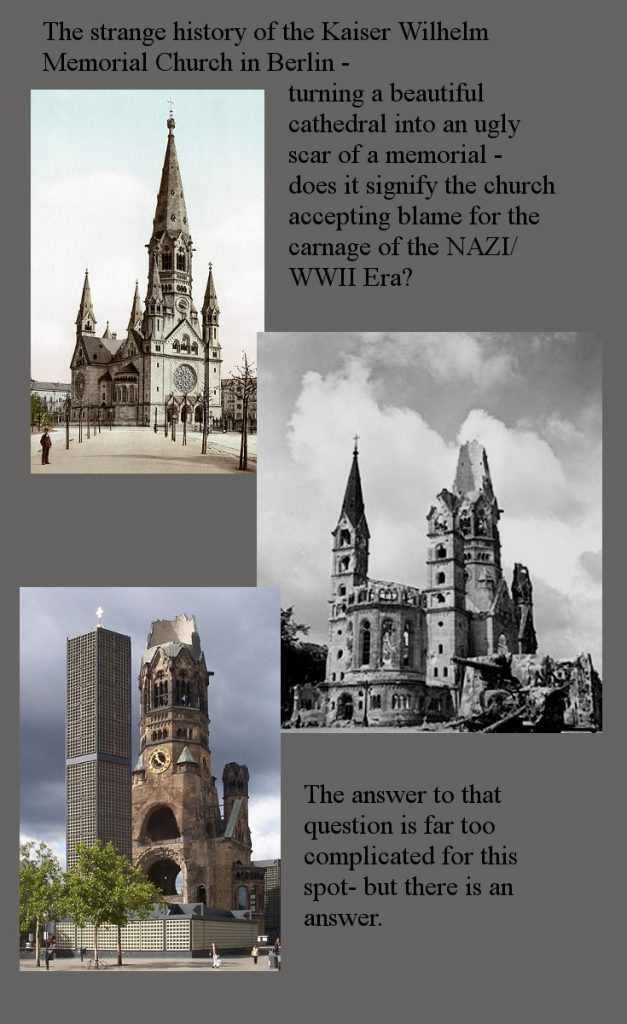 The ugly scar that is the Kaiser Wilhelm Memorial Church in Berlin today seems to accept that burden, but of what was the Christian Church guilty? That is a subject far too complex for a short answer. The following excerpts from the Introduction to War Comes To God’s House offers some observations on the question:

“It must be admitted that the Christian church did fail to stop the Jewish Holocaust and all the other holocausts of World War II. It is a lie, however, that few Christians opposed the Nazi agenda. Whether the Catholic and Protestant Churches, as they existed in Germany in the 1930s, could have stopped the Nazis is debatable, and the answer depends on our definitions of ‘church’ and ‘Christian’.

The lessons of the Church War include the ease with which a nation can slip its cultural moorings, and the danger of drift. Those who have no anchor cannot feel the pull of the current. Those who have no fixed reference point on the shore and see only the others swept along with them in the “mainstream” can have no idea of how far they are being carried by whatever popular currents are flowing through their society.

It is one of the greatest ironies of all time, and one of the greatest triumphs of the Father of Lies, that secular and neo-pagan enemies of Christ today condemn the Christian churches for not stopping the Holocaust, and yet assume no guilt at all for their own spiritual brethren perpetrating it.

They gloatingly pronounce that the moral claims of Christianity perished in the Nazi death camps. Yet, it seems to me that a proper reading of the history shows the opposite to be true – that the moral claims of a secular, anti-Christian society perished in the death camps. For if a waning Christianity failed to stop the Holocaust, then so too did the ascending handmaidens of secularism – rationalism, science, and democracy. Hitler’s party was democratically elected; not by a majority of the popular vote, that’s true, but by a plurality of voters and the Nazi Reich was given absolute power by the legal action of the German Parliament.

Upon Hitler’s assuming power (and long before in many cases) jurists, philosophers, theologians, scholars of all disciplines, and men of science, especially medical doctors and psychiatrists, all avowed disciples of scientific rationalism, flocked to the Nazi cause, where they were absorbed into the Nazi’s deep, dark irrationalism and the self-destructive delusion of power, and even of their own godhood.

It was German intellectuals and men of science who transformed the Nazis’ early pulp magazine anti-Semitism into Rassenkunde, the “science of racial hygiene” that dominated German university curricula during the Nazi era and led directly to the extermination centers.

It was Medical Doctors and Psychiatrists operating on the principles of this new “science” who signed the death warrants, at so much per head, of every man, woman, and child who entered the gas chambers whether in the euthanasia holocaust of tens of thousands of “unproductive national comrades” or millions of Jewish, Polish, Russian, etc., etc. “untermenchen” (subhumans).”