Below is an excerpt from Chapter 14 of War Comes to God’s House: A Twisted Cross Rises From The Rubble. 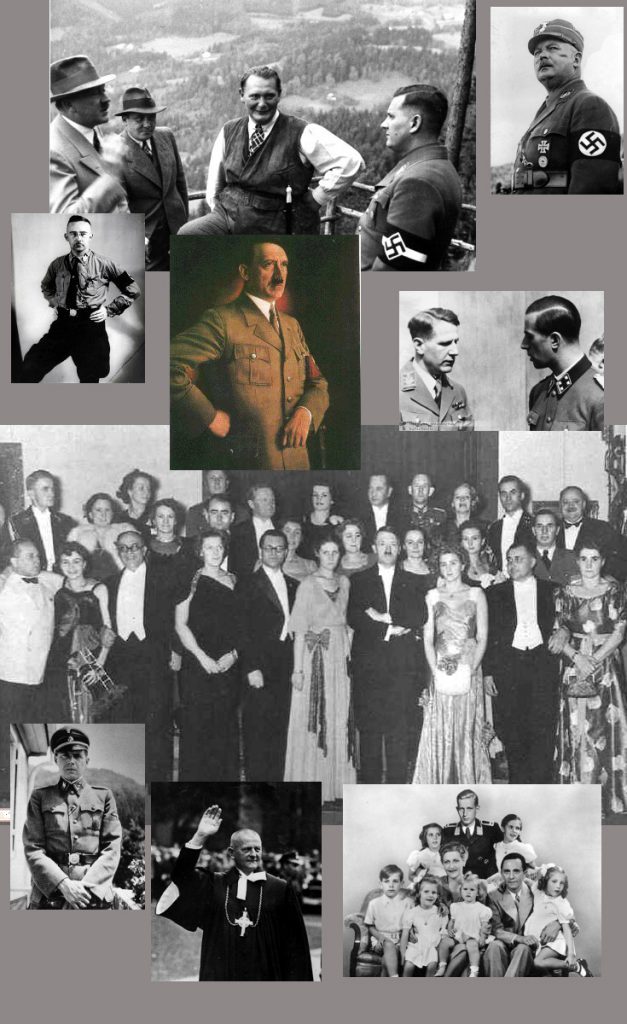 Goering was a much decorated WW1 Ace who took over ‘Red Baron’ von Richthofen’s ‘Flying Circus’ after the Baron’s death. Once second only to Hitler in the Nazi hierarchy, by the end of the war, Hitler had ordered his death. Capture by the Allies saved him from that death sentence, but Goring’s reprieve was only temporary, as the Allies sentenced him to hang. He cheated that sentence by taking his own life the night before his hanging.

Schirach was the man in charge of turning the youth of Germany into worshipers of Hitler and the Nazi Party, as he was. His worship of a false god cost him twenty years in prison after the war, and far worse, I fear, at the end of his life.

Ernst Rohm (upper right photo), the old brawler and street fighter who developed the largely blue-collar SA “Brown Shirts” into a para-military force that crushed all political opposition and opened the way to power for Hitler also fell out of favor. Early in Hitler’s reign, Rohm and the other top SA leaders were murdered and the SA dissolved by the SS, a more elite, brutal and fanatical Nazi organization.

Heinrich Himmler (second row left) commanded the SS, the Gestapo secret police, concentration camps, extermination camps, and Special Operations killing units. Despite his success at mass killing, by the last gasp of the Third Reich, betrayal and suicide were his well deserved reward.

The man in the second row center, of course, needs no introduction, Reich Chancellor Adolph Hitler.

Far right on second row: Dr. Leonardo Conti, Reich Minister of Health (l) confers with Dr. Karl Brandt, surgeon, abortionist, and onetime personal physician to Hitler. Brandt was made co-director of the euthanasia program, and along with Conti was responsible for ghastly medical “experiments” on prisoners, among other horrors. Dr. Brandt was hanged by the War Crimes Tribunals for “Crimes Against Humanity”. Dr. Conti hanged himself in his cell.

The center photograph is of a gala 1938/39 New Year’s Eve party at Hitler’s Berghof (Mountain House) compound with much of the crème of Nazi high society. To Hitler’s left was his mistress, actress Eva Braun. Hitler and Eva Braun committed suicide on the evening of Berlin’s fall and their bodies were burned per Hitler’s last instructions.

To Hitler’s right was Gerda Borman, wife of Nazi big shot Martin Borman, who stood beside Eva Braun. It was Borman who carried out Hitler’s last wishes. Hitler bequeathed his position as head of the Nazi Party to Borman that evening. Later that night, Borman crushed a cyanide pill between his teeth when he found he couldn’t escape Berlin. His remains were accidentally discovered years later, crushed glass capsule still in his mouth.

To Gerda Borman’s right stood Mr. and Mrs. Philipp Bouhler. Beginning as an insurance clerk to battered Nazi thugs, he rose to what could be considered the chief bureaucrat in the Third Reich. He was Brandt’s co-director of the euthanasia program, and he was involved to some extent in most of the Nazis’ “Crimes Against Humanity”. Both Mr. and Mrs. Bouhler committed suicide in American captivity – he by cyanide, she by jumping from a window.

Other VIPs included Mr. and Mrs. Albert Speer, Dr. and Mrs. Karl Brandt; and two of Eva Braun’s beautiful celebrity sisters also graced the occasion. Speer was a talented architect who impressed Hitler greatly, and became, as much as anybody ever did, Hitler’s friend. That friendship afforded Speer an opportunity few architects ever had for designing and building on a grand scale. Speer’s abilities led to his downfall in the end, however. As the Allied bombing campaign began to cut into Germany’s industrial production, he was taken off architecture and placed in charge of industrial production, chiefly war material, and given a slave labor force. Failure in that position would have been fatal, and Speer was both ruthless and resourceful in keeping production up to levels that astonished the Allies. He was fortunate that his success cost him only twenty years of his life in prison.

Below, left, is a photo pf Dr. Joseph Mengele; not a big shot, but a devoted Nazi notorious for his fiendish medical experiments. He died hiding out in a South American jungle.

Beside Mengele is Reich Bishop Mueller, Hitler’s old friend and choice to head the Nazi “coordinated” German Protestant Church, chief antagonist in the German Church War. Mueller committed suicide in Russian custody at the end of the War.

Last is a photograph of dedicated propaganda Minister Joseph Goebbels and his beautiful “perfect Nazi family” who figured prominently in the popular media during the Third Reich. The Nazis were masters of the psychology of propaganda. That is not surprising; propaganda is the elevation of the lie to an art form, and the one whom the Nazis served is the “father of lies” (John 8:44).

Hitler’s Last Will and Testament bequeathed his position as Chancellor to Goebbels, but whether Goebbels knew of the honor I don’t know. At any rate, the Goebbels were otherwise occupied that last evening of the Third Reich. Joseph and Magda Goebbels returned home, murdered their children and then committed suicide. Of all the “perfect Nazi family”, only the young officer away on duty, Magda’s son by a previous marriage, survived.

This appendage to the chapter is more than an introduction to the main characters of the Third Reich, it is the first installment in a photo gallery of its victims. Here, too, we have photographs of victims, and not only the innocent children. Perhaps some of you, my dear readers, will be outraged at the suggestion that even Hitler and Himmler were victims; yet they were, though certainly not innocent victims. They deserved their fates, yet they were victims of the of the age old enemy of God and man. Like father, like son – we see the family resemblance in these Nazi leaders; liars, deceivers, slanderers, murderers:

Ye are of your father the devil, and the lusts of your father ye will do. He was a murderer from the beginning, and abode not in the truth, because there is no truth in him. When he speaketh a lie, he speaketh of his own: for he is a liar, and the father of it. (John 8:44)

I have a strong suspicion that Satan derives a greater pleasure from the destruction of those who serve him than in the torment he brings on God’s children. Such a hateful spirit would, I imagine, revel in the the shock and dismay of ‘his children’ at their betrayal, destruction, and damnation.

It is for that very clear and present danger that so much of God’s word is given over to warnings like this from Paul’s Letter to the Church at Ephesus:

Finally, my brethren, be strong in the Lord, and in the power of his might. Put on the whole armour of God, that ye may be able to stand against the wiles of the devil.

For we wrestle not against flesh and blood, but against principalities, against powers, against the rulers of the darkness of this world, against spiritual wickedness in high places. Wherefore take unto you the whole armour of God, that ye may be able to withstand in the evil day, and having done all, to stand.

Stand therefore, having your loins girt about with truth, and having on the breastplate of righteousness; And your feet shod with the preparation of the gospel of peace; Above all, taking the shield of faith, wherewith ye shall be able to quench all the fiery darts of the wicked.

And it is for that reason that the German Church War was so important in its day, and why understanding it is so vitally important for us today.