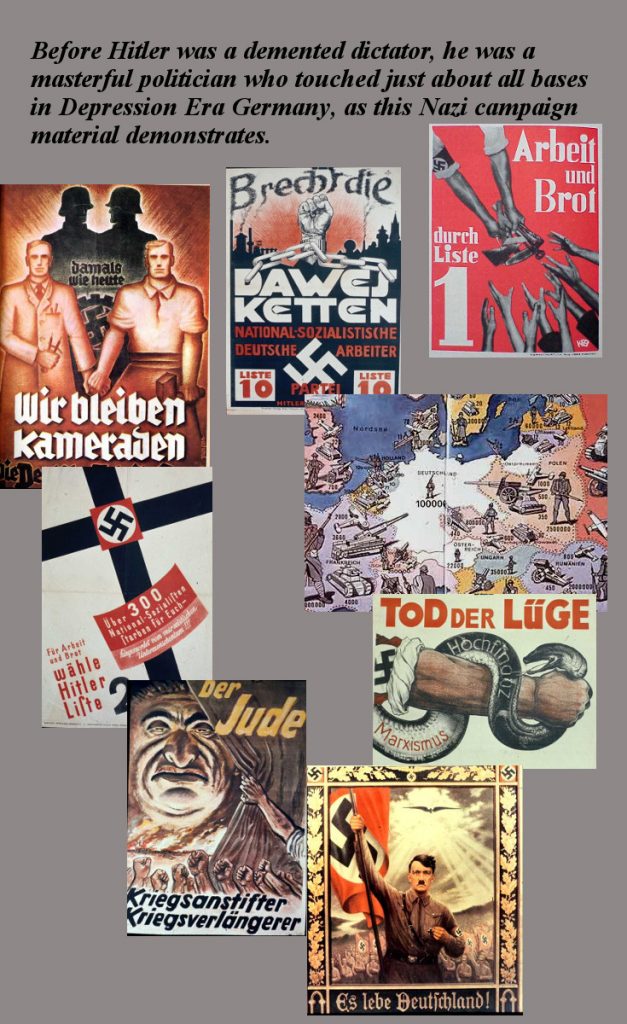 Before Hitler was a bloody dictator, he was a shrewd politician.

The answer to that question is complex and reaches far back into history and the depths of human nature with the spiritual war that has raged since Eden; which is why War Comes To God’s House delves into those subjects so deeply in its early chapters. But more concise explanations of the roots of Nazism are to be found in late 19th and early 20th Century socio-political developments covered in Chapters 2 and 3, and 10 – 12 of War Comes.

The immediate political situation that led to the rise of Hitler and Nazism, covered in Chapters 13, 14, and 15, includes the trauma of WW I and the economic and political turmoil of the following years under the decadent Social Democrat Weimar Republic, the crushing financial burden of punitive WWI reparations, the attempted Communist Revolution in Germany and the continuing threat of invasion by the Soviet Union of a nation limited by the Versailles Peace Treaty to a token military force.

The photo montage of NAZI political propaganda reflects popular concerns of the German people in those troubled times and how Hitler and the Nazis touched on all those issues. Top right poster, “Jobs and Bread” promised better economic conditions. Left of that is a promise to end the captivity of the German economy to punitive war reparations (the Dawes Plan). Far left, top row is a promise that Nazism will unite the German people across social classes, as they were united on the front lines in the War.

Second row, left – the cross and twisted cross proved incompatible, but their juxtaposition served Hitler well. The Leftist Weimar Republic was engaged in a deliberate effort to de-Christianize Germany; Hitler went to great lengths to assure Christians that he was on their side – though that was a lie. The “300” refers to Nazis that had died in street battles with Communist gangs. It appeared to many Germans in those days that there were only two choices – Communists or Nazis, for unless you had your own army of thugs to protect your political rallies, presses, and radio stations your voice would be shut out.

Right of the cross poster is a map illustrating Germany, limited by the Versailles Peace Treaty to a 100,000 lightly armed soldiers, surrounded by well armed enemies. To Americans, WWI ended with the Armistice, but that was not so. Most people know little of that history, but war continued sporadically right up until WWII. The Soviet Union’s Red Army fought a major war with Poland in an attempt to push through to Germany in the hope they could revolutionize Germany and thus conquer and destroy all “Capitalist” Europe. Fear of Communist revolution and/or invasion by the Soviet Union were major concerns of Germany’s middle and upper classes. The Nazis promised to scrap Versailles and rearm Germany.

“Death to Lies” reads the poster with the muscular arm of National Socialism crushing the serpent labeled “Marxism” and “High Finance”. National Socialism, holding Fascism as its economic system, offered a third alternative between Marxism/Communism, and Capitalism. In Fascism, the means of production remains privately owned, but is controlled by government, supposedly for the general good. That is essentially the economic model of the modern western world.

Bottom left, a masculine Nazi arm pulls back the curtain, exposing a huge Jewish caricature looming over the smoldering ruins of Germany: “warmonger” and “war profiteer” reads the caption. Jews were blamed for just about all the problems in post WWI Germany, as well as the War itself.

Finally, Hitler promised a golden dawn of hope and restoration for the weary, beaten down German people.

The unstable conditions of those years led many Germans to look for a strongman political messiah. Hitler and his Nazi followers were masters of the art of propaganda and were able to convince a plurality of German voters that he was the man to restore order and prosperity to the country. After that, it was a matter of indoctrination and violent coercion to almost totally control the German nation.