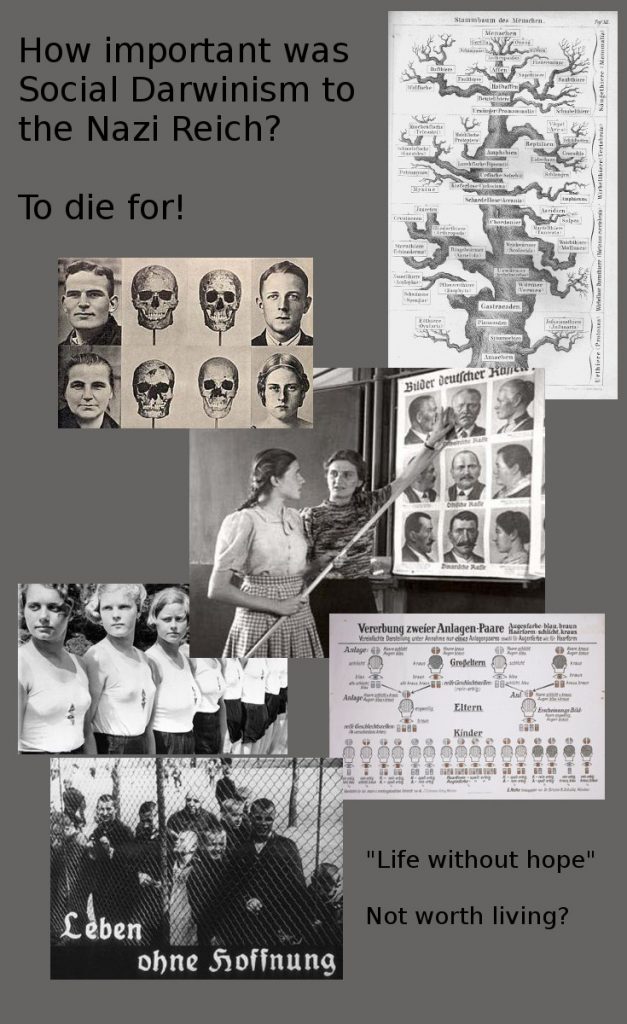 Montage of illustrations of Social Darwinism and Eugenics in Nazi Germany.

Hitler was obsessed with creating a “Master Race” through the “science” of eugenics – selective breeding of “superior” people and the weeding out of “inferior” people much as was done with livestock. Francis Galton, cousin of Charles Darwin was the founder of the Eugenic Movement, and Darwin himself was a supporter. It was a powerful movement throughout the western world in the early 20th Century. In most countries it focused primarily on birth control and sterilization of the “genetically inferior”. Hitler’s Germany took the next logical step of destroying those individuals, races, and nationalities deemed genetically inferior by Nazi Racial Science.

School children in Nazi Germany were trained in genealogy to track down ancestors and relatives who may have had some “genetic taint” like certain diseases, alcoholism, mental disorder and such, and report it to authorities. Had not WWII interfered, Germany would have seen massive culling of its population of “genetically unfit” people and an even greater degree of subjugation of women into breeding stock for the elites of the SS.

In War Comes To God’s House, the origins of Social Darwinism and eugenics are discussed in Chapters 10 and following, and we see them as factors in the euthanasia program and the numerous holocausts that accompanied the Nazi era and WWII. War Comes also reviews the popularity of eugenic ideas in America.